Rotring Isograph, 600 and other musings.

Yes, I know I said, and I quote myself, “I love ink pens – fountain pens and old skool Roting Isographs; the line quality just can’t be beaten. But they suck. Messy, temperamental and expensive, both in time, money and sanity, to keep running.” And I still stand by that. Ink pens do suck for all the reasons I stated above. But…

Over the Christmas of ’20, everything sort of fell into place, as my ever circular frustrations with my ‘project’ melted away when what I wanted to achieve, finally melded with how I wanted to achieve it. I decided to break the project into two parts – one part digital and one analogue. Each would have its own place, focus and inter-relationship, but would never cross. And the analogue was to be about drawing. On paper. With ink. I just needed to do it and hot off the back of the PostIt note project, I finally had the right headspace to come to terms with the simple idea that you just can’t fight some things that are part of you. 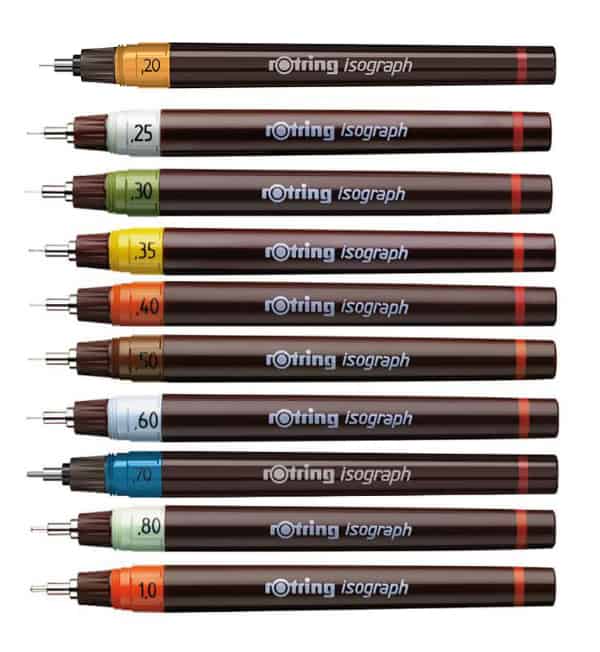 (Re) enter the Isograph.

Right back into my teens, I have always loved precision ink lines on paper and very early on had made a connection with Rotring’s Isographs; my father, being an architect, always had the technical pens lying around and I learnt to draw with them. The crisp, jet black line created by the oh so very German precision of the Isograph is something of beauty, and even the latest crop of felt tip tech pens are still no match.

The heat of German ink precision

If you’re not familiar with this ancient technology, the above pictured body has a refillable ink cartridge that you plug into the back. Shaking the pen  then pumps ink, via a weighted ‘needle (plunger style), into the nib for a insanely precise, black line or whatever width. It can be, on a bad day, every bit as messy as it sounds but the end results are often more than worth it. Without diligent practice and discipline though, you can quite easily shake the pen over your drawing and end up with ink splatters on it if the pen’s misbehaving…

While Rotring still makes the Isograph, and its ‘cleaner’ sibling, the Rapidograph, I had bought a few vintage sets on eBay some years back (and still keep an eye out for more). Age is not an issue with the pens, the design has remained unchanged, so if taken care of just keep going. Plus I like the fact that they are older pens, as strange as that may seem. But as my opening says, they are messy and temperamental; when they work, my oh my, but when they don’t…

My top tips for working with Isographs are:

1: Keep them clean. Really clean. If you’re serious, buy an ultrasonic cleaner , as it’s the ONLY way to do brilliant job of keeping them tip top without the need for pulling them apart…. which, as anyone who works Isographs them knows, is a Russian Roulette game of ‘will I kill it, or will I not?’ – Pro tip: Do not strip the pen all the way down to the point that you have the weighted needle out of the body – you might never get the pen back together again.

2: Rotring ink is quite rightly formulated for the pens, but also for technical drafting on films like Mylar and Vellum. As such the ink can become sticky and ‘gluey’ if left to sit in the pen. If you are going to use Rotring ink, also make sure it’s a fresh bottle. I found out older ink is more prone to fouling the pen quicker. I ended up trying an Aurora fountain pen ink in one Isograph with good success. It’s a little thinner, so flows easier and so far seems a lot less prone to getting ‘gluey’ on the pen.

3: Make sure you keep them in the case when not in use. 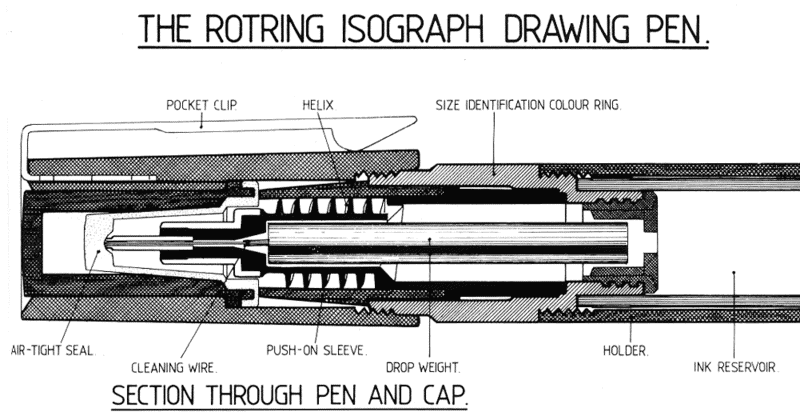 After mucking around with the pens for many weeks, I finally decided that although Isographs are wonderful things, they can drive me mad. As such  they don’t have a pole position in my workflow; you know, where a peaceful mind is conducive to creativity… or something like that.

So moving on in my continued quest for ‘the line’ (now without the inky woes), I ‘rediscovered’ the joys of mechanical pencils – you know the ones, those pencils that use little 0.35, 0.5 and 0.7mm leads you load from the top. From way back I have always associated drawing with mechanical pencils (for many of the same reasons of Isographs), much to the chagrin of many a art instructor who preferred that students use ‘proper’ pencils that are not so uptight…

Like the Isograph, a mechanical pencil has that clean, crisp line I love so much, but unlike their ink driven counterparts, they don’t clog, leak, stain your fingers, or just generally test your mental fortitude.

For me though the bonus was I had an original early 80’s Rotring 600 0.7 pencil, which was given to me (with matching ballpoint and fountain pen) a very long time ago and I’ve carried around the world with me; this pencil is quite literally like an old, old friend. Machined from brass, its weight feels brilliant in the hand, the heft from the full metal construction giving the feel of quality and certainty; draw with it long enough and plastic bodied pens/pencils feel like cheap toys. I quickly decided to supplement the 0.7mm with a new 600 2, 0.5 and 0.35mm, giving me a nice range of line weights and the pencils, if you are wondering, are the exact same design of the originals, satisfying my quasi obsessive compulsive tendencies about such things. 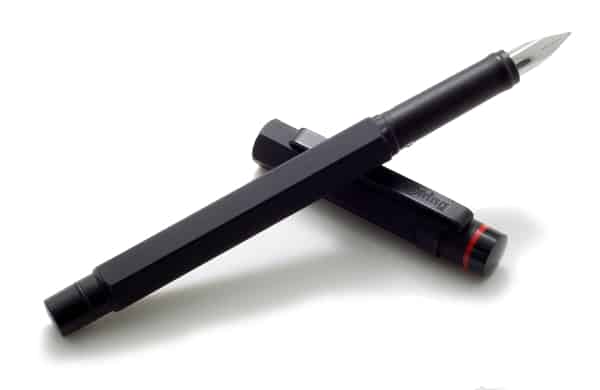 I had already been increasingly doodling with the old 0.7 600, but it had been a very long time since I used it to do more finished work, so it was like coming home after a long time away – it just felt good. What’s better, when I scanned the work, with the right adjustments, the graphite lines came up as dark as if they were inked, which was an unexpected bonus. Don’t get me wrong though, drawing with graphite has its issues and if you use a soft enough ‘lead’ to deliver rich dark lines, there is a tendency to smudge, especially if you are a south paw (though unlike ink, the solution is a neat thing called an eraser). The other issue I found was filling dark shadows, or creating heavy outlines was problematic – the blackness of the graphite line tends to become more grey and grainy, even on smooth papers. Regardless, before long the Rotring 600 mechanical pencils become my core drawing instruments for sketching right through to finished work; the Isographs coming out only if I want a vary particular black, crisp line. 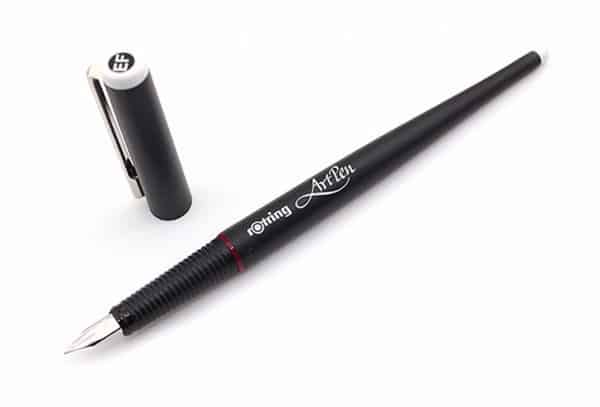 And to bring yet more retro Rotrings into the mix,  Rotring Artpens, I discovered on a whim, were perfect for heavy dark lines and even filling areas with inky blackness, something difficult to do with Isographs. So the the NOS (New old Stock) Artpen sets I bought some time back soon came out of the box.

The Artpen is another of Rotring’s pens still in production after all these years. Sold as a calligraphic fountain pen (though Rotring did release a two pen set set at the time for sketching) with a range of nib types, the Artpen allows you to do a wide range of line work and are perfect for thick outlines – their smooth flowing nibs making continuous lines a breeze. The biggest upside though is that they are relatively clean to draw with, just like most fountain pens (just be sure not to drag your palm across the ink before it dries!) and they clog a whole lot less than the Isograph.

Now the purists would say that if you are using ink, then it should be an ink drawing and if it’s a graphite drawing… 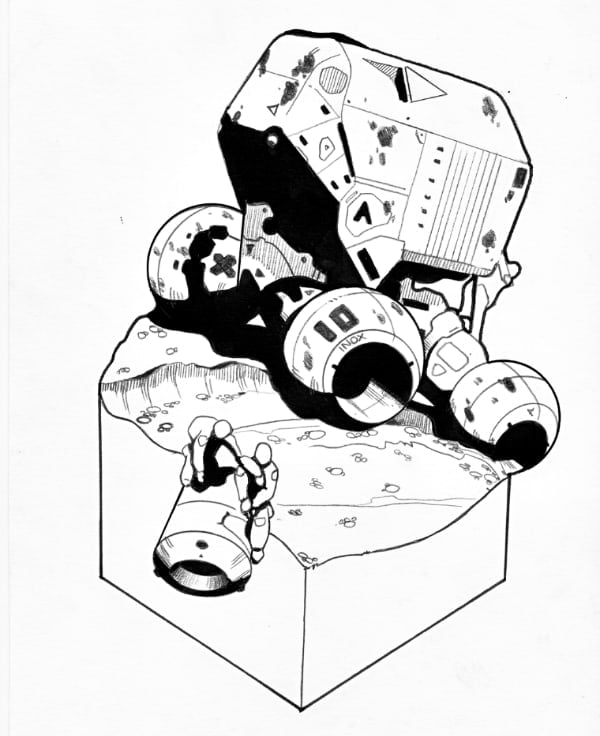 Clip Studio Paint – a true replacement for pen and paper?

Welcome to the dark side my Son aka Hackintosh, the land over the Mac horizon.

I Am Gerard Thomas Scroll To Top